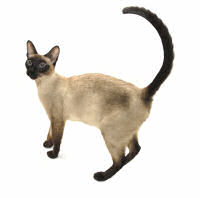 Sleek and elegant,the Siamese may be the most popular of all purebred cats! Besides being beautiful they make lively (and talkative!) companions, craving attention and interaction with their owners more than the average cat.

Legend has it that the Siamese cat originated in Siam (Thailand) where they were the prized posessions of nobility and priests. According to folklore, these cats were intelligent and loyal, and were trained to protect temples and palaces.

The true origin of the breed is in Asia probably in Siam (Thailand) or possibly Burma (Myanmar). The first Siamese cats in the Western world were exported from Thailand to London in the late 19th century. Shortly thereafter, they arrived in America where they quickly became popular and were featured in cat shows.

Siamese cats are distinguished by their long, lithe bodies, bright blue eyes and colored "points" - darker coloring on their ears, face, tail and legs. A number of point colors are accepted by the various show registries, some of the most common being the Seal point (dark brown), Blue point (dark silver) and Chocolate point (medium brown) varieties. Their heads are long and wedge-shaped and the coat is short and fine-textured. Crossed eyes, kinked tails and round heads are considered faults in the show ring, however cats with these imperfections can still make wonderful pets! Siamese crosses form the foundation for many newer cat breeds including the Balinese, the Havana Brown, the Burmese, the Ocicat, the Oriental Shorthair and the Himalayan.

The personality of the Siamese is intelligent and lively. They are also the talkers of the cat world, expressing themselves frequently and sometimes loudly! They enjoy the company of people and considered by many to be more "doglike" than other cats. Your Siamese cat would probably enjoy an intriguing cat tree for exercise and some interactive cat toys to keep him busy and out of mischief!

For more information about Siamese cats: