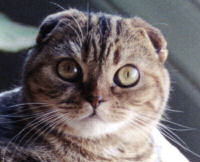 The Scottish Fold, with it's unique forward-folding ears, is one of the most intriguing of all cat breeds.

Scottish folds are delightful cats to live with, with sweet voices and a good-natured, affectionate and sociable temperament. They are large and moderately active cats with a short, thick coat and the characteristic small, folded ears - usually (more on that later). Their large eyes give them a sweet, almost "owl-like" appearance.

Scottish folds trace their ancestry back to one cat - a white barn cat named Susie, discovered on a Scottish farm in 1961, who had an odd mutation which caused her ears to fold down and forward. William Ross, a local cat fancier, was intrigued by Susie and took one of her kittens ("Snooks") to try to develop a breed with this unusual feature. The breed was later developed into it's modern day form through cross breedings with British and American shorthairs, from which these cats get their lovely plush coats. Folds can also be longhaired.

Not all Scottish Folds have folded ears. Scottish fold kittens are born with the ears erect and much of the time they stay that way. If the ears are going to fold, they begin to do so when the kittens are a few weeks old. Of the ones which do fold, some have a single fold, others have double folds which hold the ear tightly against the head, like a cap.

Not every cat you see with folded ears is a true Scottish Fold - a cat's ears can also be permanently bent from various types of injuries. It's not uncommon to find an outdoor stray cat which is one of these lookalike "faux folds", like the handsome boy pictured at left.

The genetic mutation which produces folded ears isn't without it's darker side. While one copy of the gene is relatively innocuous, doubling up on it can produce cats with osteochondrodysplasia - a crippling disorder which produces arthritis and shortened, malformed legs, tail and spine. This can be avoided through careful breeding. Responsible breeders NEVER breed two folded ear cats together, instead they will breed a folded ear cat to one with straight ears. This makes good straight-eared Scottish Folds valuable to a breeding program.

Other health problems which can affect the breed include Polycystic Kidney Disease (PKD) and Cardiomyopathy. Again, careful breeding and genetic screening can greatly lower the occurrance. A DNA screening test for PKD has been available since 2005 - if you are thinking of getting a Scottish Fold kitten from a breeder, make sure the parents have had this test! PKD is a devastating and fatal kidney disorder which shows up in cats which are an average of 7 years of age. Cats who are not carrying the gene will NOT get this disease or pass it on to their offspring, but the DNA test is the only way to know for certain.

For more information about Scottish Folds:

Scottish Fold Breed Profile - The official breed standard for the Scottish Fold cat (Cat Fanciers Association).
Scottish Fold Health Issues - A close look at two serious genetic disorders that can affect this breed, and how to guard against them.
Scottish Fold Rescue - Rescues and places Scottish Fold cats in need, including cats that are either homeless or in life-threatening situations.