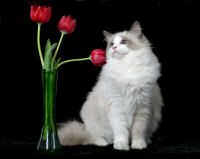 Ragdolls are large, gentle cats with fur as soft as a rabbit's hair and a characteristic sweet expression. They generally like people, are good with children and "play nice" with other pets. While they do require some brushing, their coat doesn't mat easily or require as much maintenance as some other longhaired cats.

Like Siamese and Himalayans, the Ragdoll is a pointed color breed, meaning the color is mainly on their ears, tail, face and feet. There are 3 variations of this pattern - the colorpoint (color on the "points" and a lighter body color), mitted (like a colorpoint but with white feet and a white ruff) and bicolor (where the point color also covers the back). Though other colors exist, the most common colors for Ragdolls are the same as those for Siamese - seal, blue, chocolate and lilac.

There is a popular myth that the Ragdoll cats are all descended from a white cat which was injured in an auto accident. The story goes on to claim that this cat was left partially paralyzed and from that point forward she passed this "limpness" on to her kittens, who would lie placidly in your arms when held like little rag dolls. Nice story, but not true.

In actuality, the Ragdoll breed originated in the 1960's when a woman named Ann Baker bred a white Persian to a Birman. She later mixed Burmese cats into this line. The breed was subsequently standardized through selective breeding to produce the Ragdoll breed as it exists today.

Ragdolls are placid cats who love to socialize and be comfortable. They will play with toys, but are not high-energy athletes like some other breeds. A soft place to sleep and a few amusing toys and (most important) your company is all they need!

For more information about Ragdoll cats: